The Mayor is elected at the Annual Council meeting of Alcester Town Council and acts as Chair of every Full Council meeting. In the absence of the Mayor, the Deputy Mayor will take the Chair. The Mayor is also an ex-officio member of every committee; however, does not have to sit at every meeting. The Mayor is also consulted by the Clerk on the contents of the agenda.
The Mayor is the major representative of the council, especially at events organised by other organisations or councils.
The Mayor will also organise, or by delegation to a committee, civic events to raise the profile of the council both within the town and by inviting other dignitaries to visit Alcester.
The Mayor, as leader of the council, takes the lead responsibility as Chair of the Presidium Committee. Presidium acts as the Town Council Executive Committee which comprises three Council Committees Chairs plus the Mayor, Deputy Mayor and immediate Past Mayor.  At Presidium, financial information prepared by the Responsible Finance Officer informs setting the precept for the coming year together with terms of reference and projects for each of the committees for approval by Full Council.
The Mayor is the person normally contacted in the event of complaints, in particular against employees of the Council such as the Clerk (see Complaints Procedure).

It was confirmed at Full Council meeting on 4 May 2021, that the Mayor of Alcester for 2021-22 will be Councillor Kathryn Cargill and Councillor Tim Forman was elected as Deputy Mayor. 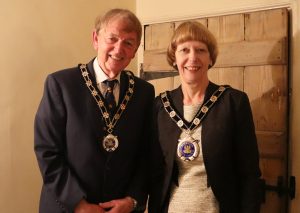